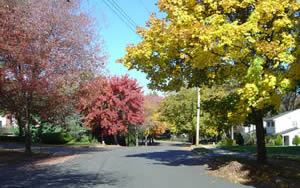 The East Brunswick School system, is one of New Jersey’s finest. The system has more than 8,500 students and over 90% of its graduates go on to higher education studies. The high school has been named a Star School by the State of New Jersey.

East Brunswick Public Library is one of the busiest public libraries in New Jersey. It is known for innovative services and programming, including the “Just For The Health Of It!” consumer health and wellness knowledge initiative, the “EB Create” makerspace, and the wide variety of special events and programs for all ages. Library customers have access to a diverse collection of books, movies and music (both physically and digitally), as well as non-traditional items like sewing machines, ukuleles and even video editing equipment. The library has won the honor of "Best Library In Middlesex County" several times from the Home News Tribune/MyCentralJersey.com. Get your library card today at www.ebpl.org/signup.

The township operates its own municipal cable television station, EBTV, seen by more than 75% of East Brunswick homes on Comcast cable’s Channel 26 and Verizon Fios Channels 37 & 38 as well as in HD streaming online. EBTV produces 200 original programs each year as well as a Community Bulletin Board that updates residents on Township news and activities of community organizations. It is the only government-run station in the state to produce a weekly video news magazine show.

Like the Raritan River that borders it on the north, East Brunswick is on the move! Proudly hailed as one of New Jersey’s 25 great towns (New Jersey Monthly Magazine, March 1999), East Brunswick’s 22.5 square miles is home to a diverse population of 47,512 per the 2010 census. A strategic location and a progressive outlook have fostered a dynamic growth of attractive and desirable residential developments, an excellent school system, shopping centers, state-of-the-art office complexes, and medical services.

Development in the center of the township, away from the heavily traveled and developed commercial area on Route 18, has seen an influx of doctors, dentists, and other ancillary medical providers in the Cranbury Road section. Currently there are 279 doctors, representing every specialty, with office space in the Township. The University Radiology Group, P.C, Central Jersey’s largest radiology group, consisting of 51 radiologists and doctors, is headquartered in the Township and has expanded its facility to house a second MRI diagnostic machine.

There are 127 dentists with offices in East Brunswick. Physical therapists, ambulance service companies and other medical service providers including 4 medical labs operate offices in the Township as well. As a service to those who visit this site, the East Brunswick Township has developed a partial database of the Medical Providers based in the township.

Senior Living at Its Best

East Brunswick recognizes the needs of its senior residents. Our Senior Center is barrier free and provides a wide range of program. Transportation is available for those who lack other means of getting there as well as to supermarkets and malls. There are currently two subsidized senior living developments with 277 apartments.

We also have three age restricted (55 and older) condominium communities with 763 units presently occupied or under construction. The Township also has two Assisted Living Communities with 180 beds and two nursing homes with 90 residents. Out reach to the Township’s homebound, including meals on wheels are available on a daily basis.

Forecasts have shown that East Brunswick’s need for additional professional office space will more than double in the next twenty years. While medical professional office space is presently at a premium in the Township, there are several developments under construction and proposed which will increase the available space by an additional 150,000 square feet in the next several years. 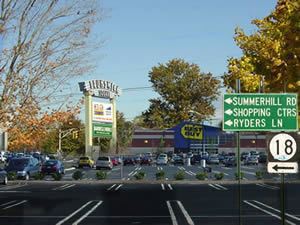 The Tower Center Complex includes two office towers, a Hilton Hotel, a convention center and one of the Township’s regional commuter park-and-ride facilities.

The five mile stretch of Route 18 within the township is lined with stores, offices and eating establishments. There are: