The Special Operations Section is comprised of a Lieutenant, a Sergeant, four patrolmen, and an executive secretary. The Section also has under its command two additional civilian employees in charge of Traffic Maintenance as well as two part-time Special Police Officers who assist with the township's impound yard and the retrieval of abandoned vehicles.

The Special Operations Section is accountable for a multitude of duties, requiring its officers to be diversified in many ways. Four of the Patrolmen, as well as the Sergeant are certified in traffic crash reconstruction. This specialization is required because the Section is responsible for the investigation of all serious and fatal motor vehicle crash investigations that occur within the Township. Officers are often called upon to answer a variety of complaints ranging from speeding problems and hazardous school bus routes to view obstructions and traffic site plan reviews.

The primary goal of the Section is to make travel safer within the Township through motor vehicle enforcement and education. Officers frequently target problem areas utilizing state of the art radar and laser technologies to enforce the posted speed limits. This "zero tolerance" approach has proven to be an effective measure in the reduction of crashes investigated by the Department. 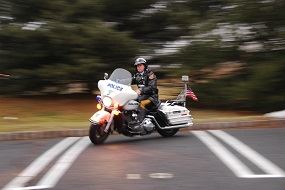 The Special Operations Section is also home to the East Brunswick Police Motorcycle Unit. This unit is compromised of a Sergeant and two Patrolmen from within the Section. The officers operate Harley Davidson Motorcycles while performing their regular duties as well as for special events and escorts for funerals and visiting dignitaries.

Captain Frank Sutter graduated from the Somerset County Police Academy in June 2005, where he served as a team leader and received the “Matter of Pride” award for his accomplishments. From March 2013 to April 2014, he was assigned as a Detective to the Middlesex County Prosecutor’s Office Gangs, Guns, and Narcotics Task Force. After being promoted to the rank of Sergeant in February 2015, Captain Sutter was assigned to the Patrol Section, then the Administrative Division, where he served as the Assistant Administrative Division Commander. Finally, Captain Sutter was promoted to Lieutenant in August 2019 and was assigned to the Office of Professional Standards. There he served as the Accreditation Manager, Internal Affairs Officer, Public Information Officer, Drug Recognition Expert Instructor for the New Jersey State Police, and Firearms Instructor.

Captain Sutter has an Education Doctorate Degree (Ed.D.) and an Education Specialist Degree (Ed.S.) in Education Leadership, Management, and Policy from Seton Hall University. Also from Seton Hall, Captain Sutter has a Master of Arts (M.A.) in Human Resources, Training, and Development. Additionally, he obtained his Bachelor of Arts Degree (B.A.) with a double major in Criminal Justice and Psychology, a Certificate in Criminology, and a Minor in Sociology from Rutgers University. Lastly, Lieutenant Sutter graduated from the Rutgers University Certified Public Manager’s program (CPM) and most recently graduated from the New Jersey Association of Chiefs of Police Command and Leadership Academy.

Captain Sutter has a military background. He joined the United States Marine Corps in December 2000 and was honorably discharged in December 2008 as an E-6 (Staff Sergeant). Directly out of recruit training, he was awarded the Company and Platoon Honor Graduate. Captain Sutter also attended the United States Marine Corps Officer Candidate School and was awarded the Outstanding Marine Corps Officer Candidate award, but turned down his commission as a military officer to pursue his career as a Police Officer. While in Iraq, Captain Sutter served as a Police Transition Team advisor to the Iraqi Police. Additionally, he was the Logistics Chief for the Al Qa’im District during Operation Iraqi Freedom from March 2006 to June 2007.

In his career, Captain Sutter received two “DWI Top Gun Awards” for being the leading DWI Officer in Middlesex County in 2010 and 2011. In May 2012, Captain Sutter was given an award by the Middlesex County Freeholders for his accomplishments in DWI arrests. He was also given 4 MADD Awards, a Unit Citation, 4 Letters of Commendation, a Certificate of Appreciation, and a Life-Saving Award. Lastly, in 2013 Captain Sutter received the National Law Enforcement Award for New Jersey presented by the VFW.

During his career with the Department, Lieutenant Gordon has served as a Field Training Officer and was a Certified Drug Recognition Expert. He has completed training in crash reconstruction and also attended the Practical Traffic Engineering for Police Officers course. Over the course of his tenure with the East Brunswick Police Department, he has received numerous letters of commendation and citations and two lifesaving awards. He holds a Bachelors Degree (B.A) in Criminal Justice from Monmouth University.